Home » About Us » History

The Second Baptist Church was formed Dec. 21, 1820 at the schoolhouse at Cathance Landing, now Main Street, Bowdoinham, with 27 charter members. Daniel Pierson was the first preacher. This church soon became what was known as the new School Baptist, and separated themselves from the old creed in 1834 because of doctrinal differences.

In 1836, the church building was built almost wholly by Captain William Purington who was a life-long friend and generous supporter of the church. The new church building was dedicated in June 1837. In 1850 the commissioned William B.D. Simmons organ(which is still played) was installed (see picture below). About 1860, the church was raised and a vestry added as a basement. The church was also thoroughly repaired and remodeled at that time.

* For reasons which are apparent to close students of Baptist interests at that early time, it is believed that the real ground for this division was not so much an over-crowded church membership as a difference of doctrinal belief. The anti-mission sentiment, along with other beliefs that mark the standard faith of the Old School Baptists, had been accepted by many of the members of the First Baptist church. Therefore, those members who had continued in the Regular Baptist faith, naturally found their environment unfavorable for developing the Missionary spirit. So, in an orderly and regular manner they were formally dismissed from the First Church in order to form themselves into the Second Baptist Church, the same to be located in Bowdoinham village.

Note: according to tradition, the First church became divided on the questions of salaried ministry, Sunday schools, revival meetings and missions

BOWDOINHAM, SECOND CHURCH. This church is the offspring of the first church, and although the old stalk has decayed and fallen, the branch lives and flourishes. It was organized Dec. 1820, with twenty-seven members, and is situated in the pleasant village of that town. Rev. Daniel Piersons was then elected pastor, and served the church about six years in the office, and still remains a worthy member. Since his resignation the church has enjoyed preaching at stated times, by Elders R. Milner about two years, John Butler, E. W. Cressy, W. T. Sargent, and William O. Grant. [Wm. Bailey is now their pastor, 1845.] In 1837 the church and society was accommodated with a new and convenient house of worship, built principally by Wm. Purington, one of its worthy members. The first and only revival in this community of Baptists was in 1840, under the labors of Mr. Cressy, by which the church was considerably enlarged. It is now a flourishing church, and is exerting a healthful influence over the village. It has sixty-nine members.

taken from “A History of the Baptists in Maine” (1845)
(for more information on the establishment of Baptists in Bowdoinham, – read from page 86)

The first church society in town is said to have been the Baptist, later known as the “Old School Baptist.'” All records of this society previous to 1820 have been destroyed by fire. On that year the society separated, the division being made on matters of doctrine and the second Baptist society was formed by 27 members who constituted the progressive element.

This church was organized in the schoolhouse at Cathance Landing. Daniel Pierson was the first preacher. It was not until 1845 that mention was made in the records of the church of protracted religious services. These were followed by the baptism of eleven persons. The following year the Baptist church was built, and during the next four years 35 were added to the church. Much commendable work has been wrought by the labors in this church; she has sent out many who have become useful and honorable citizens, among whom are Orrington Lunt and Arthur Patten.

About 1860 the church building was raised and a vestry added as a basement, the church was also thoroughly repaired and remodled. The parsonage, located on Spring Street, was purchased in 1898.

~ from the Topsham & Bowdoinham Register 1905 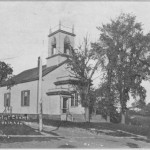 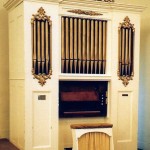 Our sanctuary is the home to a rare 1850’s William B.D. Simmons 1 manual 5 rank organ. This instrument was partially restored in 2003 and is in excellent working condition. The organ is used at least monthly in worship, and has also been featured in special concerts.

Powered by WordPress  |  Compass by InkThemes.